Prior to his successful “take no prisoners or tough but fair” reporting career and describing himself, as a “nosy & insistent” news reporter.  Mike Wallace had been in the entertainment business, in 1939, appearing as a guest on a popular radio quiz show, Information Please.  He did a voice over announcements for radio action shows like,  the Green Hornet, Secret Agent and Sky King.  When televisions came about, Mike Wallace was seen doing on-air commercials for Revlon & Golden Fluffo and a host of another game show.

Mr. Wallace has a younger son, Chris Wallace, who is the host of FOX’s News Sunday.  Chris Wallace’s older brother, Peter Wallace who had set out to be a writer, had passed away at a young age of 19 in a mountain climbing accident in Greece.  The passing of Mike’s eldest son, Peter Wallace,  led Mr. Wallace in becoming the serious & great journalist that he was.

The ability to have so many interviews with many politicians, “villians” and celebrities in his “tough but fair” charismatic way, might not have been easy but due to his persistence, hard work and thoroughness in having all of his facts has led to those intriguing interviews that sometimes had people uncomfortable, caught off guard, or walked off his set.   All in my opinion, (like few other journalists I admire today) this style of reporting is a great example of a successful and fulfilled career in journalism.

No matter what was on television in the evening my dad would switch the channel to CBS to watch 60 Minutes.  I can remember the sound of the stop watch ticking at the beginning of the program as I would hear Mike Wallace’s voice, it would spark my curiosity to become interested in who he was going to interrogate that night and how the interviewees would react to Mr. Wallace. 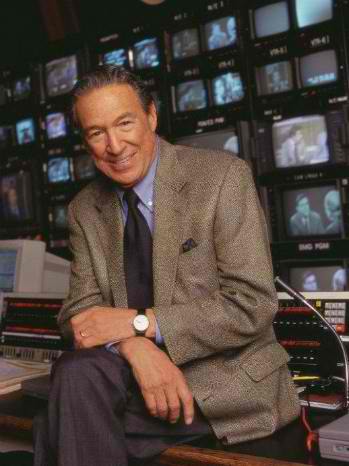 For more on his life and career you can click on http://www.cbsnews.com/video/watch/?id=7404684n