As you already know hurricane Sandy has left many without food, power, a place to live and unfortunately some lives were loss.  Senor Miguel Bloomberg finally made the decision to cancel the 2012 NYC ING Marathon, a decision that should have been made sooner but never the less it was made.  Let’s not forget tomorrow is Election Day.

With the intense news coverage on the aftermath of Sandy, prior to the hurricane was the endless commercials slandering candidates during this 2012 Presidential campaign, meaningless wars around the world, random fires sparking up taking days to put out, 3 to 4 mysterious men roaming the New Jersey streets attempting to kidnap children, a nanny taking the lives of 2 very young innocent children, 2 women who were violently beaten & rapped in broad daylight, the loss of lives due to violence..etc, etc, etc.  All weighed heavy in my heart so much that my brain began to hurt.  I’ll admit ALL the negativity and bullsh_ _ that’s in the headlines, on every channel, and across the airwaves.  Feelings of discouragement, worry, fear, even anger tried to inch it’s way into my heart and not up to continuing this vision I have for this blog.  Seriously?! an option I’m NOT willing to let come to fruition.

So the last 3+ weeks I’ve been taking a semi-digital detox from it ALL by focusing on strengthening my faith through prayer not just on myself but for others.  Here’s some truth I want t share with you readers.  The last 3 years I’ve had some major struggles in my life right up to the end of summer this year, which had me feeling low and worthless.  Even when I made the decision to publicly share my blog and join the world of independent writers/professional bloggers, I’ve come across challenges in that arena as well.  Challenges that had me feeling like this… 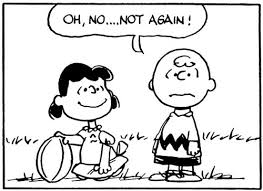 Yesterday while on my way to drop off extra items for those who were without.  I took a detour through Central Park to get to the train that will bring me closer to my destination.  I took a few photos of the runners who did not get to run their marathon this year decided to run the 26.2 anyway around Central Park.  For those non-New Yorkers, that’s 59th Street to 110th Street back to 59th Street four-times.  It was inspiring to watch all the runners and see people out there cheering them on, myself included. 🙂

Don’t get me wrong, I understood both sides of the argument about the marathon… why New Yorkers were passionate about having it cancelled and why runners (local, national and international) were passionate about not cancelling the marathon.  Even understanding the guilt most runner’s would feel if Mayor Bloomberg did not cancel.  Which a lot of runners made a decision to roll-up their sleeves go to Staten Island to see what they can do to help.

Groups of runners enter the park preparing to run 26.2 for many inspiring reasons.  To achieve personal goals, raise money for a charity they believe in, many included running to raise money for the survivors of hurricane Sandy too, running for humanity, and most importantly running for the gift of life.

YES! THE GIFT OF LIFE! With so much focus on the stress or failures of life, materials things and saturated with so much chaos & negativity, the gift of life at times can be easily forgotten.

Before continuing towards my destination, I took a few photos of moments that inspired me to stay focused on my goals and in away remind my heart of its humility, its purity, its strength, its resilience, the love and compassion that resides inside.

Well I gotta run (I know ‘gotta’ poor grammar), in regards to the future and my life’s purpose I have somethings things to think about and prepare for. In the meantime, I will leave you with a new video “Lover of the Light” by Mumford & Sons which features Idris Alba ladies. 😀  Oh and p.s. Idris will be the next James Bond and the first African James Bond to boot! We’ll see, I am loving Daniel Craig as James Bond. ;D